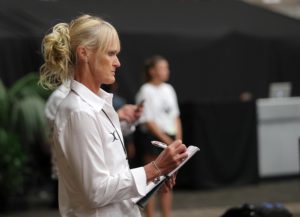 NETBALL CAN ONLY IMPROVE IF THE LEVEL OF UMPIRING IMPROVES……… 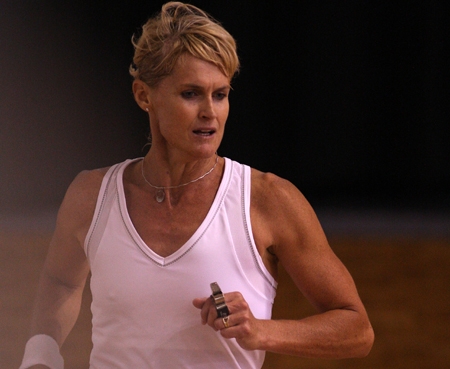 Who is Annie Kloppers

“If you want to get to know me – play sport with me.”
• Sport is part of the core of my existence.
• I have a BURNING passion for this wonderful game of netball.

I was a top hurdles and high jump athlete, during my primary school years. Netball was my team sport. I was selected as one of the top 20 players in South Africa – (position GD-WD), during the latter years at President High School. I competed in pentathlon and was the SA gold medallist in this event and also in the 300m hurdles. I went to Stellenbosch University, to study Human Science, and I still could not choose between netball and athletics, so I did both and competed on National level in both sports – to the frustration of my coaches.

Twice, I was awarded as the best netball player in South Africa. While playing for the SA PROTEA Team, one of my highlights was being awarded the silver medal at the World Cup, Birmingham in 1995. I stopped playing in 1999 because of knee injuries. I got my Springbok colours as an Athlete in Heptathlon and also broke the Africa Record in this event – my best individual events were hurdles and high jump where I cleared 1,87m. During my years as a netball player, I was also umpiring and was awarded my SA A grading in 2003.

Highlights in my umpiring career:

2008 I umpired the Australian Thunderbirds vs. Vixens and Swifts vs. Fever. On those two matches, I was awarded my International badge from Chris Burton and Maureen Boyle.

My first match as an International Umpire was:

The following are also games that I umpired internationally:

In May 2016, I decided to retire from my International umpiring career.
The next step for me, after umpiring was to become an International Mentor/grader.
I was involved as a Cadet while still active as an Umpire :

In 2017 I was appointed as ITP (International Testing Panel of INF).

I have also put my hand to paper and in 2011, wrote the very successful “NETBALL PLAY WITH RULES,” published by Future Managers and available to purchase on this site – updated 3 times with the new updated INF rules published January 2020.