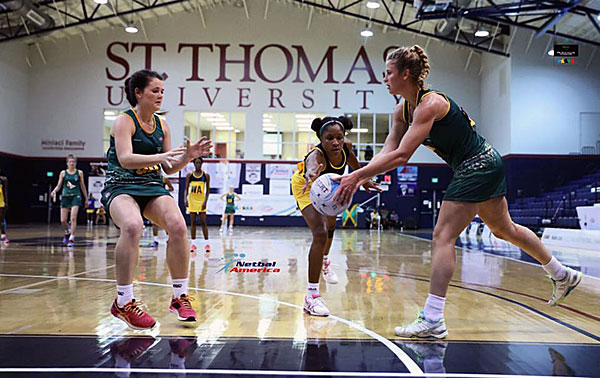 The skill of the umpire plays a crucial role in this scenario and players and umpires must work together. If each adheres to their respective roles and responsibilities then this situation should not arise. The umpire must clearly state and indicate where the sanction is to be taken. The player must take up the correct position. It is a matter of discretion for the umpire to apply common sense and good judgment. The umpire may:

Umpires should not be over fussy or pedantic.  If near a transverse line – say centre third or goal third.  If close to the goal circle – say inside or outside the goal circle.

In very rare circumstances if the umpire is convinced that the player did not hear their indication (the arena may be very loud) they can ask that the sanction is re-taken but every effort must be made to avoid this by using a strong whistle/voice, strong hand signals and where applicable eye contact with the player can avoid this from occurring.

Umpires must ensure that they are clearly indicating and stating where the sanction should be taken. If an umpire’s call is not clearly heard a player may ask the umpire to repeat the infringement penalised or seek clarification of where a sanction is to be taken from rule 13.2.3 (i).

The normal sanction for a minor infringement should be applied – free pass to the opposing team to be taken where the infringement occurred.

If a player takes the sanction from an incorrect position, the umpire should award a free pass to the opposition. The terminology used should be – Incorrect position or Incorrectly taken, Free Pass South Africa.

In extremely rare situations where the same player repeatedly takes the penalty pass or free pass from an incorrect position, then the umpire may invoke the Game management procedure for unfair play – delaying play, and award a Penalty pass which is advanced (unless the non-offending team is disadvantaged) and the player is cautioned.

Should this situation occur it is imperative that the umpire review their match and identify where they should have used more effective umpiring methods to ensure this scenario did not occur.