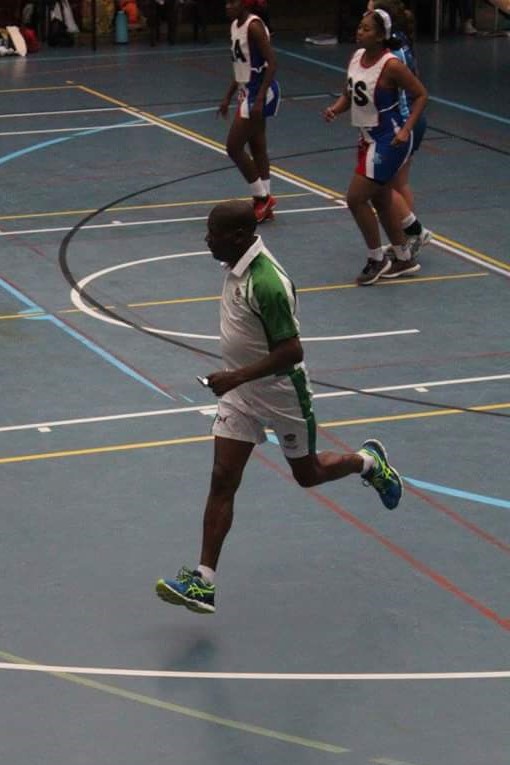 INVOLVEMENT WITH CTNF UMPIRES:
Jongi is involved with CTNF as an Umpire: To Grade umpires,Trainer Coach, Mentor and oversee the Development  of Elite young upcoming umpires in ranking level of WPUA.
POSITION HELD.
• He was the National Schools Basketball Coach (SAL-4) U/18 Boys Championships in Gauteng and won Gold in 1998- Retired.
• He served as part of CTNF Umpires Association in the Graders Committee since 1999- currently.
• He has also served on the Netball South Africa Grading Panel and also in South African Schools Netball as Grader. National Subcommittee member since 2006- currently.
• He acts as the Cape Town Netball Federation Umpires Academy Training mentor.
• He serves as the Cape Town Primary Schools Netball Umpires Co-ordinator since 2005- currently.
• He was the Cape Town Primary Schools Netball Boys co-ordinator and SAL1 Coach, coach the U/19 Boys Western Cape Netball National Boys Team and he received Gold for the first time for Western Cape Netball in Kimberly 2005.
UMPIRES WORKSHOPS HELD.
• He is the CTNF and CTPSN Co-ordinator and conducts umpires Workshops and Accreditation Courses since 2003- currently.
UMPIRES ACHIEVEMENTS HELD.
• He was invited to umpire at Senior Cosana National Africa Games in Durban at the University of KZN in 2004.
• He was also appointed as an umpire for the U/13 National Shoprite Checkers Challenge which was hosted at Mew-way hall Cape Town in Khayelitsha in 2004.
• He was the part of the group that drafted the SASN Umpires Policy for National Schools in 2003.
• He was again elected by Netball South Africa (NUA) to umpire in the Cosana Africa National Games in Windhoek, Namibia were he first received his Africa Cosana ‘A’ Badge from the International Netball Umpire Tutors (ITP):
Ms. Margaret Deighan: England Netball Umpire ‘A’ Badge.
Mr. David Palaamo: New- Zealand Netball Umpire ‘A’ Badge.
• He was nominated the WESSO Technical Official Umpire Awards Winner and also nominee as WEPCASSO Technical Official Umpire Awards achiever in 2011.
• He received the Best Umpire Trophy of the year in CTNF in 2010/2012.
• The CTNF hosted the NSA Spar Senior Championships in Cape Town at the Velodrome hall and he received his NSA SA ‘A’ Badge which is the highest grading that an umpire can receive in Netball South Africa Federation (NUA).
• In 2012 he got the opportunity to umpire at the FISU World University Netball Championships, he umpired the International Match played against two countries NSA U/21 Team vs England at Good Hope Centre Hall in Cape Town.
• He was part of the  Brutal Fruit Netball Premier League for both years 2016/17 as an umpire and he also had an opportunity in 2017 to Officiate at the National Netball Varsity Cup.
For Jongi it is a privilege to be involved in Netball both at NSA and SASN level as a Technical Official Umpire (Coach).
He also excel to remain calm and humble in his performance of duties to improve the Standard of Netball Umpires within the Cape Town Netball Federation and Cape Town Schools Sport Organisation.